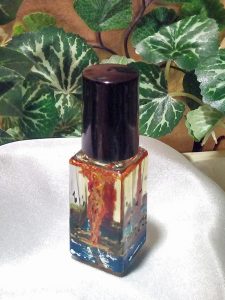 One Dram Hand-painted Bottle or Roll-on

Miriam was the daughter of Jochebed, sister of Moses and Aaron.

Her Scent is a fresh, warm aroma including essences of Rose of Sharon, Cypress, Hyssop, Lemongrass and Lavender.

Daughter of Amram and Jochebed of the tribe of Levi. Miriam was a young girl when Moses was placed into the Nile River, also called sea of Reeds. She watched over him until the Pharaoh’s daughter saw him and sent her handmaiden to retrieve him from the water. Miriam offered to get a wet nurse bringing back her mother to care for Moses. (Exodus 2:1-10)

The next time we hear about Miriam is at the crossing of the Red Sea, where she is mentioned as the first prophetess in the Bible, also a gifted poetess, singer and dancer. Moses led the men in a song of deliverance after they arrived safely on the other side. Miriam led all the women in song and dance as they answered the men(Exodus 15:1-21).

“Sing to the Lord, For He has triumphed gloriously! The horse and its rider He has thrown into the sea!” Exodus 15:21

This is the most ancient song recorded in the Bible.

Micah 6:4 says that the Lord sent Moses, Aaron and Miriam before the children of Israel into the wilderness. As was the custom at that time, the women worshiped separately from the men. It appears that Miriam had a leadership role over the women in instructing them regarding devotion and worship.

There were sorrows and murmuring in the camp. In Miriam’s later years she got into trouble at Hazeroth due to speaking against Moses.

Then the Lord came down in the pillar of cloud and stood in the door of the tabernacle, and called Aaron and Miriam.… And when the cloud departed…, suddenly Miriam became leprous. Numbers 12:5,10

The Lord required her to be shut out of the camp seven days. Moses and Aaron interceded for Miriam. The Lord heard their prayers. The people rested until she was restored. She later died at Kadesh in the wilderness of Zin at about the age of 126 or 127 and was buried there.