A group of ladies in OH ended up having a holy encounter filled with The Scent of Heaven oils, Dyed4you scarf and Dyed4you Art!  Here’s a portion of what happened when the Paga (Intercession) oil was brought out (you can read the full story on the Dyed4you Blog)

A few ladies started asking about Dyed4you and The Scent of Heaven. One woman named Tia was asking how they’re created, who prays over the oil and scarves because she is very particular about who/what she buys. I gave her some testimonies and assured her Carol and Meghan were truly anointed of God. LOL…little did she or any of us know, we were about to have a firsthand encounter with the anointing on these scarves and oil from a Living, Almighty God who created them!

As everyone is looking at the scarves, the Lord told me “Get your anointing oil, Paga (Intercession), and let Terri smell it”. Terri is a VERY anointed and powerful intercessor in the Lord. So I went to my purse and got my oil. I went to Terri and said “Terri I know you like anointing oils and I think you’ll like this oil. It’s called Intercession.”

As Terri smelled it, you could see the Spirit wash all over her and she fell back on the couch and started speaking in tongues! She sat back up and I put some of the oil in the palms of her hand so she could smell it. She started just worshiping & praising God and praying. 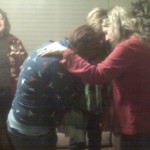 Her sister Toni (who is also an anointed intercessor) was near her and wanted to smell it too. Same thing pretty much happened to her! So I placed a drop in the palm of her hand too. Well then a few other ladies wanted a drop in their hand! I ended up anointing all 20 women in the room and as each one received the oil in their hand they started praying & praising the Lord. I could see the Spirit of God wash over them as they received the oil! It was incredible!

In less than 5 minutes, all 20 women were crying out to God, praying in the Spirit, and worshiping & praising Him…a Holy Ghost party completely and totally ERUPTED!!!!! The Presence of God was SO THICK you could hardly stand!

In the midst of this, the Lord said “anoint Tammy’s house! Anoint the doors and windows!”. So I did and prayed in the Spirit. As I’m pacing around all the women are praying & crying out. Some of them surround Tammy in the middle of the family room and start laying hands on her and praying over her.