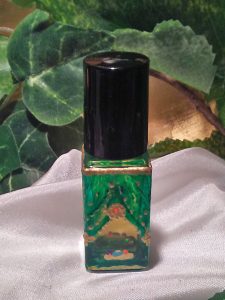 One Dram Hand-painted Bottle or Roll-on

Bathsheba was a beautiful wife of King David, mother of King Solomon.

Her Scent is a rich, warm aroma including essences of Sandalwood, Ylang Ylang, Myrrh, Jasmine and Cassia.

Also called Bathshu’a in 1 Chronicles 3:5; daughter of Eliam also called Ammiel; the granddaughter of Ahithophel (2 Samuel 23:34); wife of Uriah the Hittite, one of the mighty men of David’s army; wife of king David; mother of Solomon.

When we first read of Bathsheba, from the roof of his house, king David saw her bathing and inquired about her and sent massagers who brought her to him. She became pregnant and told David who sent for Uriah to cover his sin. Uriah refused to see Bathsheba during his visit so David sent him back to the battle with a letter to Joab which would assure Uriah’s death.

The Lord sent Nathan the prophet to confront David with his sin. David repented (Psalm 51); Bathsheba bore a son who subsequently died.

So David said to Nathan, “I have sinned against the Lord.” And Nathan said to David, “The Lord also has put away your sin; you shall not die. However, because by this deed …, the child also who is born to you shall surely die.” 2 Samuel 12:13-14 (NKJV)

Bathsheba was hurting over the death of this child so David came in to comfort her. She again conceived and bore Solomon whom the Lord called Jedidiah because He loved him (2 Samuel 12:24-25). She also bore three more sons, but the Lord had chosen Solomon to be king following the death of David.

After David’s death Bathsheba spent the rest of her life in the palace. Though Solomon didn’t always heed her advice, he had a throne set for her at his right hand (1 Kings 2:19).

Though God punished David, still, He didn’t withhold His love from David and Bathsheba. Solomon was chosen to carry on God’s Covenant with David (2Samuel 7:12-16). Bathsheba was recorded in the genealogy of Jesus as “she who was the wife of Uriah” (Matthew 1:6).